Poker math: when and how to use it 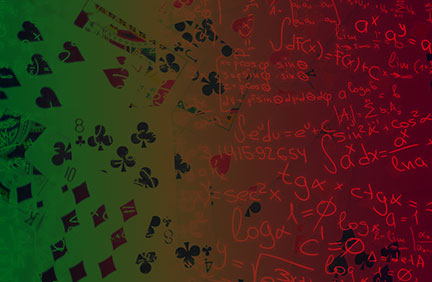 Poker math many novice poker players are perceived as something extremely difficult. However, in reality everything is different: even a person with a non-mathematical mindset is able to understand the peculiarities of poker mathematics, the knowledge and application of which, by the way, distinguishes a professional poker player from a beginner. No strategy will be considered complete if the player is unable to calculate the pot odds and the cards to potentially strengthen the hand.

It is important to remember that in poker it is not luck that matters, but skill and mathematical probabilities. During each game, the poker player must make those decisions that will be positive at a distance. This is how it becomes possible to use poker as a way of long-term income. To understand the essence and principles of poker mathematics will help analysis on a specific example.

When poker math is used

The player will need it when he needs to estimate the chances of strengthening his hand and decide whether it will be profitable to try to “catch” his own outs in relation to the pot odds.

To make a decision, several aspects are taken into account:

Here's an example to help you understand the basics of poker math faster:

What should the Player do?

As part of hold'em, poker math is the easiest to learn, as players receive only two cards each. When counting outs you need to take into account the number of cards remaining in the deck, as well as what cards are capable of giving the hand a boost.

In the example above, you can see that the player has a flush draw, the second strongest, and an overcard (king). The conclusion is as follows: in the case when the king comes out on the river or on the turn, the Player beats the opponent (if he hit only one pair on the flop). How many cards can strengthen the hand of Hero?:

In total (kings plus cards of clubs), there are twelve outs. To quickly calculate the chances of winning, poker players use rule x4 and x2... Its essence is as follows: to understand his chances of winning, the player must multiply the number of outs by four on the flop before the turn, and on the turn before the river by two. Based on the realities of this example, it is easy to calculate that the probability of amplification with twelve outs is 48% (12x4). The deviation from the exact mathematical forecast is 1.3% in this case, that is, a quick calculation gives a fairly accurate result.

It should be borne in mind that outs can play into the hands not only of the player, but also of his opponent. therefore it's important to evaluate your opponent's range when calculating your outs - for more profitable game... In the above situation, there is a possibility, for example, that Villain has a stronger flush draw to donk.

This parameter assumes the calculation of the bet amount in relation to the size of the pot. When counting, the player must understand how much money can be won, and how much needs to be bet.

In the example, the total pot is $6.5, to which the opponent's bet is added - $3, for a total of $9.5. Accordingly, the pot odds are 3: 1. For a positive call in this hand, the player needs to win only one time out of three - 25% times. Here you need to call, because the chances of strengthening are higher than the chances of the pot. At a distance, such a decision is a plus.

There is also a concept reverse pot odds... This calculation gives an understanding of how much the player will lose if his draw is weaker than the opponent's combination. The calculation algorithm is almost the same as in the case of pot odds.

Obviously, the mathematics of poker, though not elementary, is understandable, and with experience it is gradually brought to automatism.