Rating of rooms for money: TOP-4 rooms for playing poker 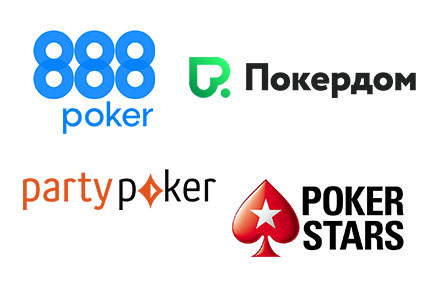 There are a lot of online rooms where you can play poker, but only the best sites are included in the rating of poker rooms. Having analyzed all the most popular resources, we have selected four services, the game on which will bring not only pleasure, but also profit.

All poker players know about this room. He is considered the best in many criteria. Firstly, according to the conditions for beginners. There is a huge pool of players, including inexperienced ones. So even those who have never played online poker can easily find an opponent according to their level. 888poker also offers great starting bonuses for its new users. Everyone who just signed up gets a whopping $ 88 in their account. And for the first deposit of money, several rewards are put at once - instant 8 dollars and a doubling of the amount deposited.

At all bonus program of Eights - a topic for a separate conversation. This room is renowned for its generosity. Here, the rewards are laid not only for novice poker players, but also for experienced players.

This well-known site got into our rating of poker rooms for money not because of its name. The reason for getting into the TOP 4 of the best rooms was, first of all, a profitable loyalty program, in which absolutely every player of the room can take part. As part of the loyalty program, you can get back from 20 to 40 percent of your rakeback. It all depends on how actively you play during the week.

Also have PartyPoker boasts a variety of ways to deposit and withdraw money from an account. A large number of options greatly simplifies the life of a poker player, because you can choose the most suitable method. So, Partypoker allows you to replenish your account and make a cashout not only with the help of numerous electronic wallets, but also with a bank card.

This is the most popular Russian-speaking poker room... Its main difference is that it was created specifically for residents of the CIS countries. The peculiarity is not only in Russian, but also in the fact that you can work at the box office and place bets in local currency. Now PokerDom supports dollars, euros, Russian rubles and Kazakh tenge.

Besides this, PokerDom has many other advantages. For example, bonus variety. This room, like 888, offers a registration incentive. And by the way, the amount of the payment has been increased from 777 to 1,000 Russian rubles. There are also rewards for the first top-up. There is also a cashback return of up to 50 percent as part of the loyalty program.

You can play PokerStars for money both in a special client and in a mobile application. This is an absolute advantage of the resource, but not a feature, since all of the above rooms have the same software. The only thing that distinguishes PokerStars in this regard is the flawless operation of the programs. Judging by the reviews and our practice of using both the client and the application, the software works without interruption.

For beginners PokerStars offers two first deposit bonuses to choose from: either $ 30 in cash and tournament tickets, or the ability to double your deposit to $ 600 in half.